It’s been a while since I last posted some news! No excuses. 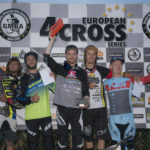 Meanwhile, my race Season has come to an end with back to back wins at European 4Cross Series Gold Events in Ajdovscina (Slovenia) and Leibstadt (Switzerland). What was inbetween was ups and downs. I achieved some goals like winning the European Series Overall title. Some I missed, the 4Cross Pro Tour Series were one disappointment, starting with my sickness in France, an avarage result in Winterberg and a crash in Qualifying at JBC Revelations in Czech republic. There is also another story, the World Championships. After suffering an injury in July, I was back in shape when a mechanical ended my day way too early in 1/8-Finals after a solid time trial run… *** happens.

Although it was a long and tough Season, it certainly was a good one, made by success, defeats, new impressions, new places and last but not least a lot of fun on two wheels.

And well, that’s the point where I want to thank everyone who made it possible, especially all my sponsors, teammates and friends. 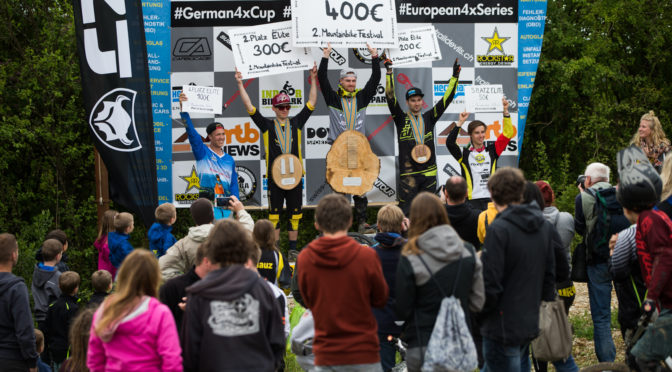 The season has kicked off and damn, how I missed the racing during winter!

The first 3 rounds of the European 4Cross Series are in the books already, and the next ones will follow soon. The season starter was a dual eliminator, hosted by the Indoor Bikepark in Pfäffikon, CH. After a hard crash in practice, and you don’t want to crash on the asphalt track, I did my thing and took a first win. Certainly a hard race, especially with the French Crankworx winner Chaney Guennet competing.

What followed was three weeks of bacteria infections. Having dealt with souch health issues a lot last year, it’s probably a thing that will keep me busy throughout the season. Anyway, just in time I recovered and signed in at the second round of the series that was held in Homberg, Switzerland. It was a classic dual slalom race as ever. Dual slalom is one of the most fun disciplines in my opinion, but not where I feel home I have to admit. The main goal was to get in some consistand runs in race conditions. I qualified second, went through the heat’s into the quarters, where I crashed out after some mistakes. No problem, 5th of the day!

One of my big goals this season is to do well especially at the Gold Event’s of the European 4Cross Series. After the first two rounds being Silver Events, it was time to bring it on in Reutlingen Germany. The field of riders was strong with the World Champion, Mitja Ergaver and the former World Champion, Aiko Göhler, being on the gate. More competition came from the German Champion and local rider Benedikt Last and the rest of the riders from all over Europe.

I had clean sheets from qualification untill the big final to take my first big win of the season. I’m really happy about it and I’m optimistic for the following races!

Next up will be another Silver Event of the European Series before I head out to Winterberg for the 4X Pro Tour race! 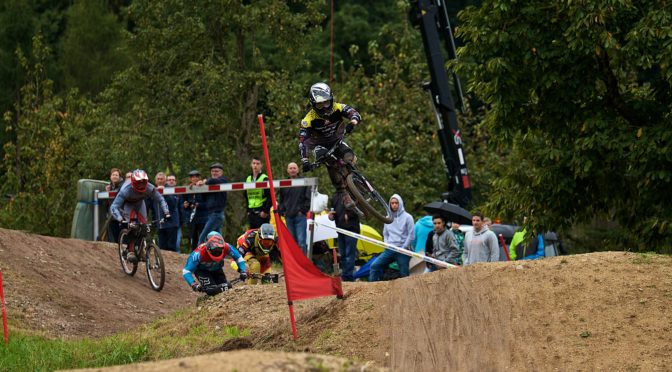 Another season has ended last weekend. It was a year containing everything, great successes, bitter defeats but many good and important experiences after all.

The European 4Cross Series , containing 10 rounds held in Germany, Switzerland and Italy were a big deal this year. I raced 6 rounds and brought home 3 victories, finishing in 2nd place in the overall ranking. 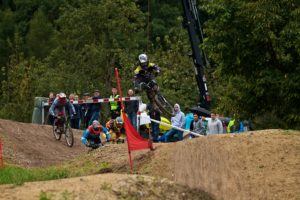 It was the big goal of my season and I felt so ready for it – the World Championships. My shape was perfect, but it turned out that my mind wasn’t. I crashed out in quarters on the first straight, so I finished in 14th spot. That was one big disappointment, it just shouldn’t happen this year. 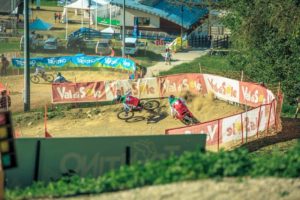 The Swiss National Championships were held in Leibstadt, the place where my local club keeps organizing one of the best events of the year, every year. I like the track, the atmosphere and the people around.

In timetrials I set the fastest time by nearly one second. The harder it was to lose it before the last corner, I just made too many big mistakes. One more lesson was learned, a Silver Medal was won.

Because of a collision of dates I decided to skip the last round of the European 4Cross Series to race the final round of 4X Pro Tour at Azur Bike Park in the South of France.

I was in a good mood, chilled out and ready to perform. Fitting my bad health condition this year, I got sick before the first practice. What could I do, I went to the drugstore and made it work somehow for that one last race of the year. Despite my physical weakness I performed well. My mind was ready this time and I finished in a strong 6th place. In the overall I was surprised to make it on the podium coming in 5th, eventhough I missed the round in Scotland. I’m happy to end the season with positif feelings after going through all sorts of troubles this year. 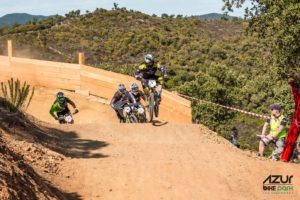 For that occasion I want to thank all my sponsors for supporting what I do. Thank’s everyone for making it happen! 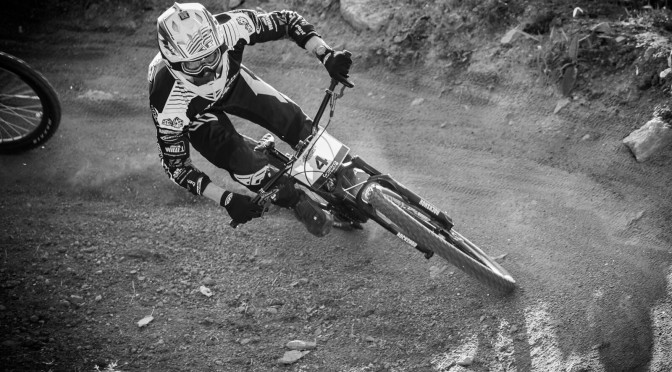 Last weekend it was finally time to race in Czech Republic again. Super excited and nervous at the same time is the mix you are going through at this event. The track is so nasty and difficult, spectators going crazy and the best riders in the world on your left and right, that’s JBC Revelations. 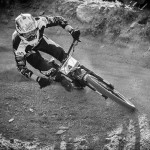 The weather was really bad untill qualifying. As probably anyone else I suffered many hard crashes in practice. For my qualifier I had the track dialled, laid down a smooth run and set the 4th fastesttime

On raceday I was getting sick, but the use of much medicine made my start possible. I didn’t feel that bad though, the track dried out and I was ready for the show. I went through my 1/8 final easily to qualify for the quarters. Having a World Champ as well as Pro Tour winner next to me, I had it all to do from the inside. My gate was good, but not good enaugh. Pressure came from the outside and I had nowhere to go.. in affection I missed the flag, so my race was over. Huge bummer for me after feeling really fast the whole weekend, but that’s racing. 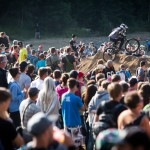 Unfortunately my desease went on and got major, so I was taken to hospital. I’m still recovering there, not losing the faith to be back at the European Series round in Italy next week.

I’m glad to have souch great sponsors on board who keep my game up, thanks guys!!

Check out the official Track Preview with Tomas Slavik, Felix Beckeman, Quentin Derbier and me as well as the official video! Link below.

To get ready for JBC 4Cross Revelations after my exams break and to keep my leaders sport in the series I went to compete at the 4th Round of the European 4Cross Series.

The Track was tiny but certainly to get the overtaking and cornering Skills on point.

I had a good Qualifier eventhough it didn’t lead to the first spot. That was not perfect because the race was going to be decided at the gate, and as the first straight was practically too short to get in front from the outside gate, it led to my crash in semis while still trying to.

I could win the small final which puts me in 5th. Not the spot where I normally wanna be, but I learned a lot by doing.

I’ve been racing in Reutlingen for years and I can fairly say that this track suits me.

It did not turn out any different than I hoped for, won all my heats as well as the race in front of the current World Champion Aiko Göhler! 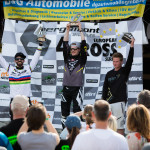 Winterberg is always a place I like to come to, enthousiastic crowds and good racing action guaranteed.

Strong winds, heavy rain and even snow in May gave us hard times. I had a decent qualifier and came in 7th place, which left all opportunities open for the upcoming race.

On race day I was ready, physically and mentally so I managed to get through the heats without any trouble till semi finals. I didn’t get the snap I wanted and was kind of always in the wrong place, so I lost this one. Then again, my small final was very good, I led the field and took 5th place at the end, which is a great starter to the Pro Tour so far.

After preparing for the 2016 season for months it was finally time to get back to racing. The season kicked off with the first round of the European 4Cross Series. The Dual Eliminator in Homberg is known as a mudfest at ist best.  After struggeling to get together good runs down the slippery course in the previous years, I managed to get a top 5 finish last weekend. Eventhough the result is not what I am normally able to deliver, I’m pretty happy with how things went for me. Getting a few serious race runs dialled in difficult race conditions is the best prep for the season I could wish for. Also It’s very good to see so many elite riders line up for the first round of the new European series. 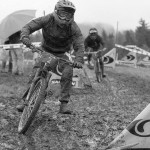 Next up for me will be a round of the Pump Battle World Series at the Rocket Air Slopestyle and round two of the European 4Cross Series in Winterthur!

Last weekend, it was all about Swiss 4Cross Cup in Leibstadt.

After travelling the world all season I was really excited to race „at home“ again. The organiser of the race made a great effort, the local club is known for perfect organisation and knows how to host a high class race.

I won qualies and had an insane battle with the German Worlds Bronze Medalist Benedikt Last in the Main event. I was riding smart and pulled a move in the last corner to take the win.

Next up will be the last race of the season, the last round of the Bergamont Swiss 4Cross Cup will be held in Wolfach, Germany

As the season is moving on, it was time for the last round of the 4X Pro Tour already.

With my teammate Ingo Schegk I trevelled to Malmedy, Belgium.

The track was not that technical but fast and steep for sure. Then the rain came in it was all about cornering skills, so I decided to race on my Bergamont Kiez Slope full suspension bike.

I had good fights through the rounds and made it to the main event where I finished 3rd and got my 4th Pro Tour podium of the season. My good and constant results through the season put me in 3rd place in the Overall Pro Tour Ranking. After the disappointment at World Champs this made me happy again, I nearly forgot how well my season went.

Breaking the happiness of this weekend was the horrible crash of my teammate Ingo who broke his femur. Hope u get back soon!